By far and away Blackheath’s best performance of the season to date, and achieved against one of the early pace-setters in the 2016-17 National League One campaign.

Although they had lost narrowly at Moseley a fortnight ago, Coventry arrived at Well Hall having already racked up in excess of a half-century of points in both their other matches, the latest a 61-14 drubbing of Macclesfield at the Butts Park Arena, and with a total of 19 tries in their three matches to date, against Blackheath’s somewhat meagre collection of four.

Yet, despite a mighty pack built around New Zealand born, and former Leicester Tiger, Boris Stankovich at loose-head, which gave them total dominance at the scrum during the first period, Coventry failed to create much in the way of sustained pressure and succumbed to a side who, away from the set-piece, held the upper hand throughout.

The early scrums may have been massively one-sided, but the line-out was a far more even contest, if only because of a significant cross-wind that made life difficult for both sets of hookers, and a throw for Blackheath, after Coventry had conceded two early penalties, was secured by the visitors. However, as Simon Whatling controlled the clearance, the fly-half’s flat pass found Leo Fielding, who in turn produced a lovely off-load for Chris Knight to evade the cover and score on four minutes.

Another lost line-out put Blackheath under pressure mid-half, and Coventry did manage to use their set-piece to good effect, number-eight Darrell Dyer driving across from the base to reduce the arrears to 7-5, but as Whatling, who along with Jack Walsh managed expertly from half-back throughout, gave the Club field position in the 23rd minute, Chris Walker and Markus Burcham made inroads, and Knight, still with plenty to do, muscled through defenders for a second score.

A Fielding penalty extended the advantage to 15-5, and although the hosts lost Aston Croall to a yellow card, enabling Coventry to mount some pressure prior to the interval, they ended the period with the ball held up across the goal-line, the final time the West Midlanders came remotely near to another score.

The third quarter put Blackheath out of sight. With a tiring front-row, along with the introduction of Club tight-head Terry Read, negating the power of their pack, Coventry struggled to get out of their half of the field. Twice within a five minute spell Dan George was driven over from close-range line-outs, and with Fielding adding another penalty after a high tackle on Walsh, Blackheath had doubled their tally to make the score 30-5 in the 62nd minute.

The final indignity for the visitors was to lose Stankovich’s replacement Jimmy Litchfield to the sin-bin for a scrum infringement, and with the extra space Geoff Griffiths glided across for a fifth try, after Jake Lloyd made a break down the left flank, and Fielding collected an interception for a sixth, the full-back converting for a personal haul of 17-points and to complete an emphatic win.

Next Saturday Blackheath travel to Yorkshire to take on Hull Ionians. Kick-off at Brantingham Park is at 3.00 pm. 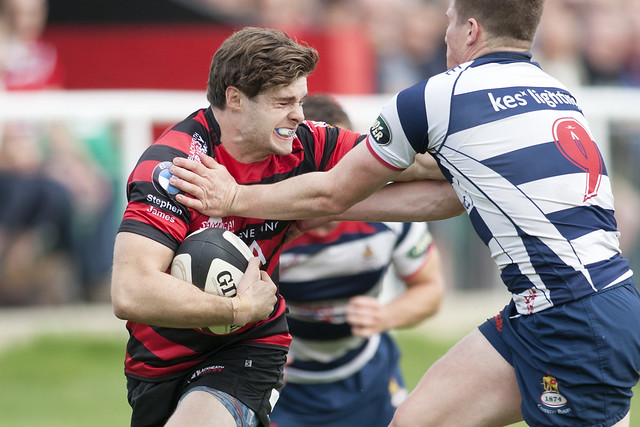