Whatling Streets ahead to steer Club to first

A torrid opening half hour gave way to a steady fightback, orchestrated by some fine line-kicking from Simon Whatling, to give Blackheath a first win at Molesey Road in their eight league visits to date.

For 30 minutes, however, it looked as if the Club’s miserable run in this corner of Surrey would continue as Esher, dominant at the set-scrum and seemingly able to turnover possession at will, kept the visitors pinned to their own half of the field.

As Dave Allen was temporarily removed for impeding a quick tap-penalty, the hosts opted for a close-range scrum to drive hooker Neal Sweeney across for the opening score, and with Freddie Owen becoming the second victim of an already mounting penalty count which would rise to 14 during the course of the match, EEEs again chose the set-piece, their superior number claiming a penalty try for a 14-0 lead with only the first quarter completed.

Gradually, however, Blackheath managed to string enough phases together to exert some pressure of their own, and as the visitors were restored to full strength (and made intelligent use of the numerous changes now allowed off the bench), it was Esher’s turn to incur the ire of referee Matt Turvey, with second-row Cameron Gentiles yellow carded for deliberately collapsing the maul. With half-time approaching a line-out opportunity was lost, but a poor clearance enabled the visitors to attack again, and as Jack Walsh found a long pass out wide, Leo Fielding glided across the goal-line, Freddie Gabbitass adding the conversion to reduce the deficit to seven points at the break.

Esher found attacking opportunity early in the second period, but the clinical finishing of the earlier part of the match had now deserted them. Instead, with the wind now in Blackheath’s favour, a Gabbitass penalty further reduced the arrears, and as the Club full-back found two fine kicks out of defence after Esher knocked-on five metres from the opposition goal-line, a partial charge-down from the hosts’ defence saw Whatling swiftly feed Markus Burcham for the try that put the visitors 17-14 ahead.

Now Whatling’s expert kicking turned the screw. Threading ball along the ground to touch, and repeatedly turning the EEEs defence, the pressure was firmly on the hosts and in the 66th minute the Club fly-half, who’d only come off the bench due to an early knock to Dan Hamilton, became part of the beautiful backs move off line-out ball which saw Geoff Griffiths over for the decisive try against the wing’s former club, Fielding this time adding a fine conversion from out wide.

There was still time for an Esher counter to take the Surrey side to within range of the Blackheath goal-line, and regain their finishing touch by working open-side Tom Yellowlees over from line-out ball.

It set up a pulsating climax, but Blackheath held enough possession to see out the final five minutes and break their Molesey Road duck.

A second place finish in National League One is still possible for Blackheath who return to Rectory Field next Saturday for their final league match against Blaydon. The match will be a testimonial for Dave Allen who will play his 278th and final match in Club colours before retirement. Kick-off is at 3.00 pm

Also, on Sunday a Blackheath XV with travel to Aylesford to contest the Kent Cup final against Westcombe Park. Kick-off for this match is at 4.00 pm. 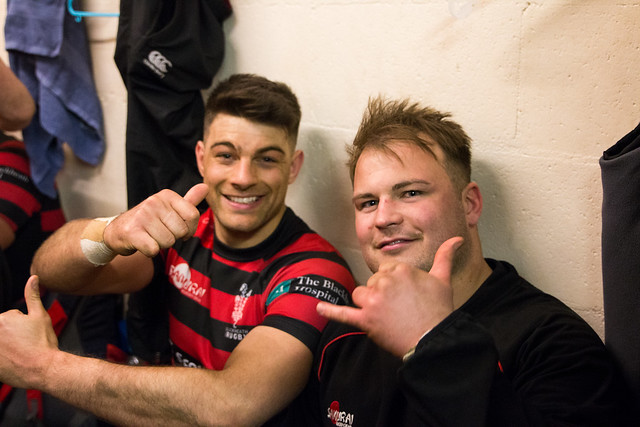