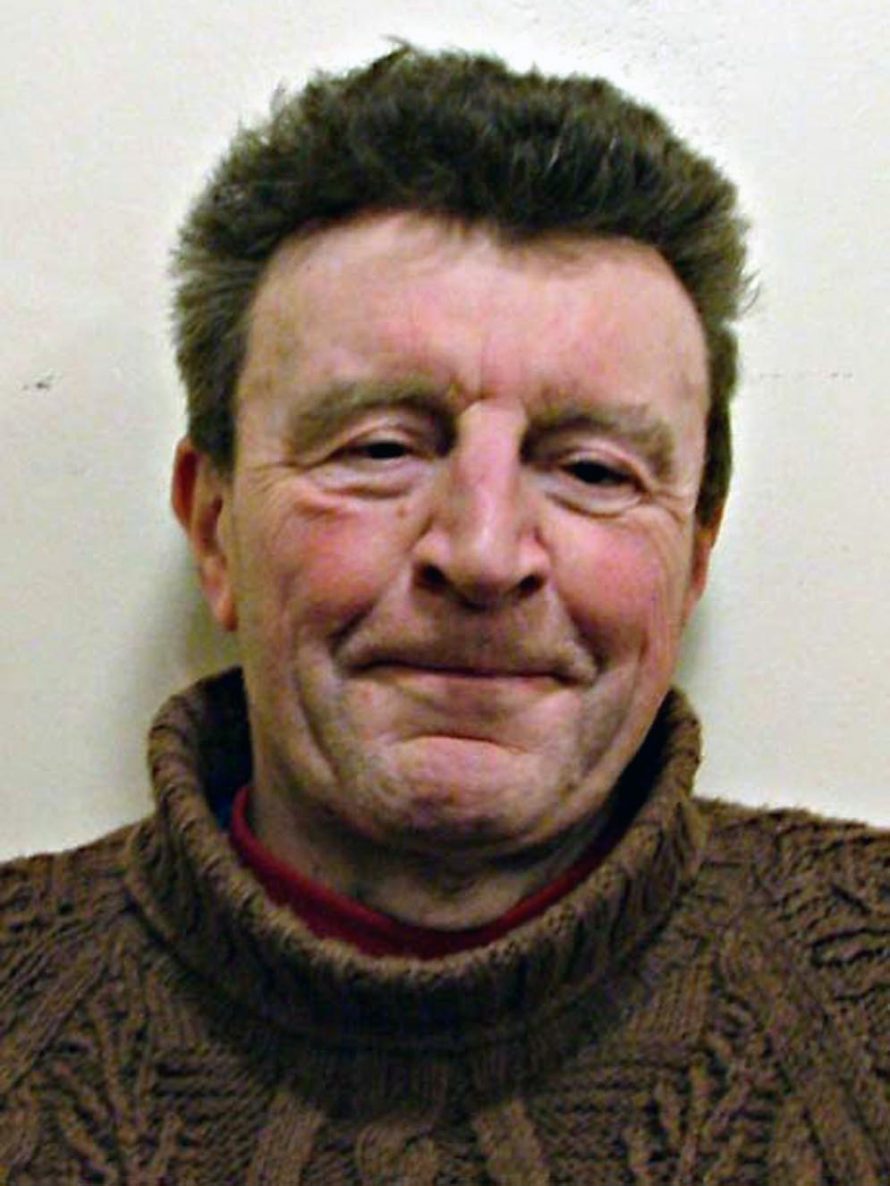 Details have been announced for the funeral of our longtime member, supporter and Club volunteer Jim Campbell.

It will take place at 2.45pm on Friday January 28th at the following venue:

For those who are unable to attend, there will be a webcast of the funeral service. It can be accessed using the details below:

As there will be family flowers only, Jim’s family have indicated that any donations in lieu of flowers can be made in Jim’s name to Greenwich and Bexley Community Hospice. This can be done online at the website www.communityhospice.org.uk

There will be a reception after the funeral from 4pm in the Clubhouse at Rectory Field, the address of which is:

The news of Jim’s death, which came on the morning of Saturday 18th December, has shocked and saddened all those who knew him.

Jim, a Scotsman through and through, lost his sight shortly after birth but never let that prevent him from enjoying sport in all its forms, whether it was playing visually handicapped football and cricket in his youth – he was captain of his cricket club – or attending the football matches of his beloved Clyde F.C. Two of Jim’s happiest moments came in the late fifties when he was at Hampden Park to witness Clyde win the Scottish Cup and later when he was invited to hold the trophy itself. He listened avidly to any sports broadcast on the radio. As a young boy he would lie in bed listening on a crackling radio in the early mornings to broadcasts from Ashes Test Matches in Australia and late at night to American Football and Baseball commentaries beamed by the American Forces Network to U.S. servicemen in Europe. He became something of an expert in those two sports long before the vast majority of people in this country knew very much about them.

During his early years, Jim’s family moved around Britain because of his father’s different postings in the rail industry and most of that time came to be spent in England. When Jim left home to further his studies in London, he pursued his love of sport, attending the Calcutta Cup at Twickenham and once managing, with his visually handicapped friends, to get to three football matches in the top division on the same day. He had a soft spot for Chelsea because, he said, they looked after the visually handicapped very well at Stamford Bridge with an excellent earphone audio commentary.

It was when he moved to the Blackheath area that he was to become a much loved and highly respected member of Blackheath F.C. for well over forty years. He took great pride in saying that his membership application was supported by the then Club President Phil Phillips in the late 1970s. Soon after he joined, Jim indicated that he was eager to do something to support the Club and Blackheath’s Personnel Officer, Bill Butler, suggested that he help Peter Brown (Brownie), the captain of the Brigands (Blackheath’s 3rd XV), by becoming his team secretary. The Brigands were not by any means renowned for their attendances at training but, after Jim had committed to his formidable memory the names and telephone numbers of the fifteen players selected for the Brigands, which had been given to him by Brownie, the players all received a phone call from Jim. Needless to say, after a call from such a committed and persuasive Scotsman, there was an unprecedented full attendance at training on the Monday evening. He continued in this role with different captains for four seasons.

Jim’s astonishing memory became legendary and he put it to use on behalf of the Club. For names, dates, match and player information, he was a walking encyclopaedia, as was his expertise of the London Underground. If anyone needed to know how to get to anywhere on the Tube in London, they only had to ask Jim and he would come up with an exact description of the route to take.

By now, Jim was working on the switchboard of a major British Bank and was able to use skills developed there to help him in communications with players and coaches, as well as officials from other clubs. This led to him taking on the role of the Club’s Liaison Officer, where his personal skills with people and knowledge of rugby were to make him many friends around the country. He perfectly and diplomatically fulfilled the important task of talking to other clubs, confirming fixtures and exchanging team lists with other clubs.

Jim also took on other duties. For a time he was Fixture Secretary for the Club under-18 team, supporting the Director of Youth Development, Steve Pope. He became the point of contact for the Press and Media and assisted the Women’s Rugby Section, which they greatly appreciated.

During the 1980s, Jim also helped to organise social rugby. This included such games as Jim Campbell’s XV v Annie Metcalfe’s XV or Jim Campbell’s XV v Golden Oldies Junior Colts, usually played at the Rectory Field on a Sunday as an excuse to have some fun and a few beers.

Throughout this time, Jim enjoyed many trips with the 1st XV to away matches, travelling with his many Club friends over the years. He didn’t just confine himself to this country, either. Jim was a great ‘tourist’ and travelled on several of Blackheath’s foreign tours with his late wife Mij. He was, perhaps, the only one of those on the tour to Menton, in France, who could remember anything that happened on that visit.

Jim was one of the forty-seven people who gave much needed support to the Club in the 1994/95 season by purchasing a Life Membership. He was elected as a Members’ Representative on the Club’s General Committee in 1996 and remained in that capacity, as well as that of Liaison Officer, until 2018.

In 2009, Jim suffered a terrible accident, being knocked down, on a pedestrian crossing, by a hit-and-run driver. It left him partially disabled, in addition to his visual handicap. However, that didn’t stop Jim. He continued to act as Referee Liaison for the Club’s lower teams and the Women’s Rugby Section, and was a popular figure amongst Kent referees. In May 2012, Jim’s hard work was recognised with the presentation to him of The Unsung Hero Volunteer Award by the Club’s then Performance Director, Yusuf Ibrahim, “for lots of reasons but his work with referee liaison is very much appreciated.” 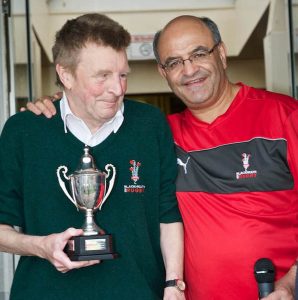 He continued to attend 1st XV matches at the Rectory Field and was able to enjoy the excitement and atmosphere of the games whilst listening to commentaries provided at his side by friends over the years. When the 1st XV games were moved to Well Hall, Jim found it more difficult to attend than at Rectory Field and he gradually had to rely on match reports from his friends. In the summer he would enjoy watching Blackheath Cricket Club’s matches at the Rectory Field and he remained a regular figure there on winter and summer weekends and weekday evenings, more often than not occupying his usual seat on his stool at the corner of the bar. Burns Night became an annual social event there, thanks to Jim.

As well as following Blackheath and Clyde, Jim fervently supported his country of birth, Scotland, and, as he jovially and constantly pointed out, any team playing against England. He had a highly mischievous sense of humour and would take great delight in telephoning all his friends about any Scottish sporting successes.

The pandemic lockdown meant that Jim was not able to go for his lunchtime drink at his favourite pub, the British Oak, or to meet his friends at Rectory Field, but he bore all of it with stoicism. He kept himself going with a never-ending supply of braille books and the support from his family, friends and carers. Relief came during last summer when he was able to go back to the Sports Club at the Rectory Field to attend the cricket, meet other members and again visit regularly the British Oak.

Jim was on very good form in what was possibly his last phone call, telephoning a close friend to jovially admonish him for not offering congratulations to “his Scottish friend” on the Scotland team’s selection to represent Great Britain at Curling in the coming Winter Olympics.

That was the extraordinary Jim Campbell. A proud Scotsman who amused everyone with his wit and astonished everyone with his encyclopaedic knowledge. A friend to all who knew him and, in spite of never being able to play the game, a man who became a legend at his beloved rugby club. Nobody who met him will ever forget him. A brave Scottish warrior and a man of sport, who was much loved and will be very much missed.