THE BOYS FROM BLACKHEATH PROPRIETARY SCHOOL

In the 2008/2009 season Blackheath Rugby celebrated 150 years since its foundation. It must not be imagined, however, that when the boys from Blackheath Proprietary School started playing rugby on the Heath in 1858, they were a club in the sense that one would understand it today. They did not have an official secretary or treasurer until 1862 and matches would be arranged on an ad hoc basis.

The players were very young in those days. In 1863, Francis Maule Campbell was only 19 years old when he was Treasurer of Blackheath FC and also the newly formed Football Association. Fred Stokes was just 16 when he played the first game for Blackheath in 1871, 19 when he played for England and 24 when he became the second President of the RFU in 1874. 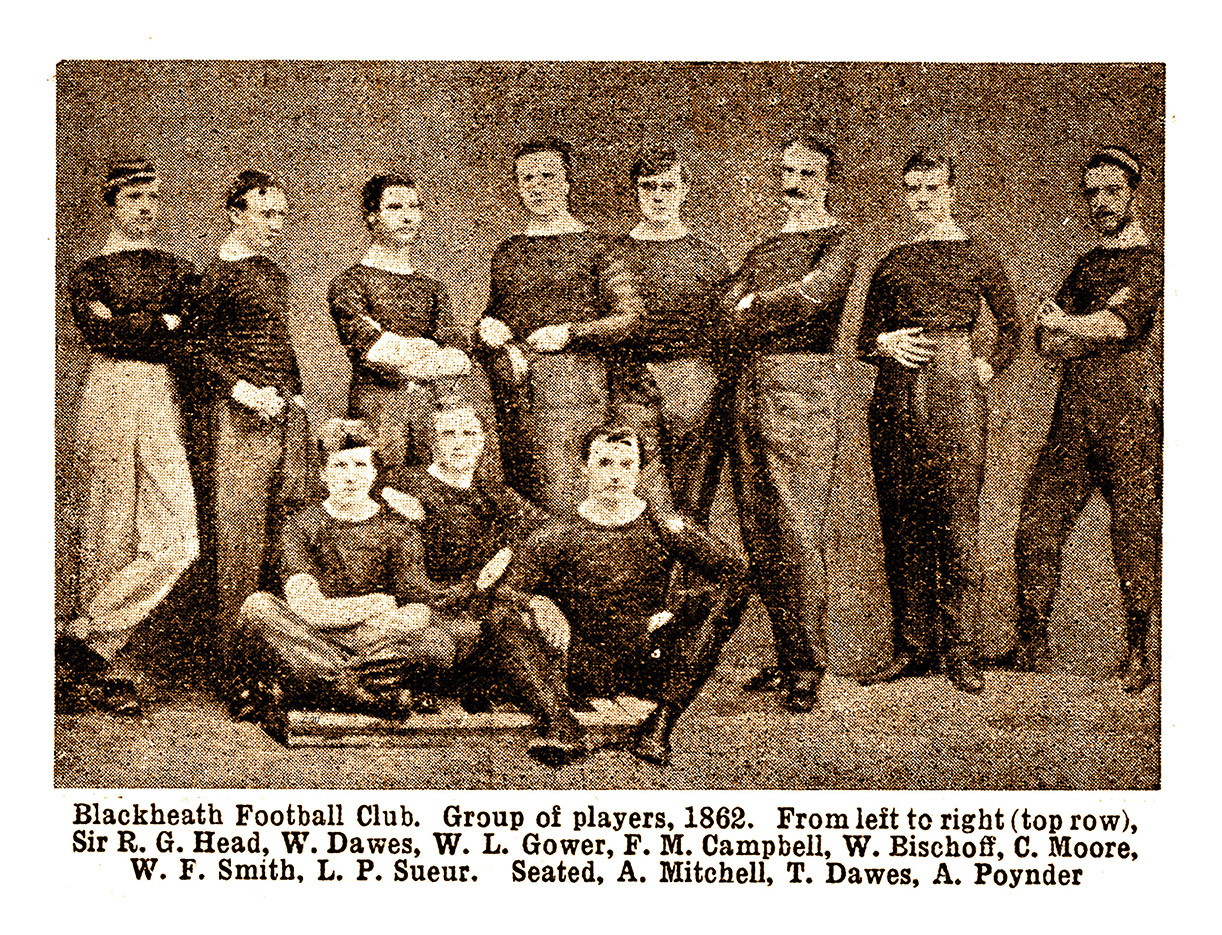 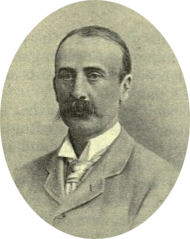 Fred Stokes represented Blackheath FC at the meeting to form the RFU and was its 2nd President aged 24. Captain of Club and captain of the first England Rugby XX. An outstanding golfer and Kent cricketer. 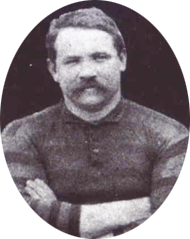 Henry Holland 'Jumbo' Vassall is regarded as one the best ever rugby generals. Captain of Club 1884-1885. Credited with introducing the three-player three-quarter formation instead of the use of two three-quarters then in vogue. Captained Blackheath in 1884-85. 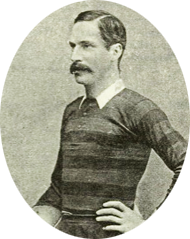 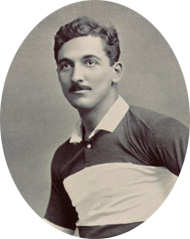 Charles Burgess Fry was widely regarded as England's greatest 'All Rounder' playing cricket, soccer, rugby and was holder of the world long jump record for 25 years. Played for the Club and Barbarians.

The situation is described rather well by Arthur Ash who founded Richmond FC in 1861. In a letter to a meeting to form the Football Association in December 1863, he wrote, “They (Richmond) would have sent representatives to the Association meetings from the first, but for the fact that they had no organised club (as distinct from a team playing under the name of Richmond, be it understood)”. Then followed the organisation of Richmond FC as a properly constituted club. This seems to have followed the pattern set by Blackheath in 1860 because the Sinclair brothers Alex and John, along with Burnett and Gower etc. attempted to formalise their situation by calling themselves the Old Blackheathens, with William Burnett as their captain. In theory, this was to be a Proprietary School Old Boys team, however due to lack of numbers, they always had to rely on outsiders to make up a team that would consist of up to twenty players. After two years trying, the boys finally had to admit that they were an open club and so at the start of the 1862-63 season, they changed their name to Blackheath Football Club. The event was celebrated at the Jubilee Dinner held on 24th February 1912 (see main image at the top of the page), and later at the 75th Anniversary Dinner in November 1937. In 1958-59 the Club celebrated the centenary of the foundation. 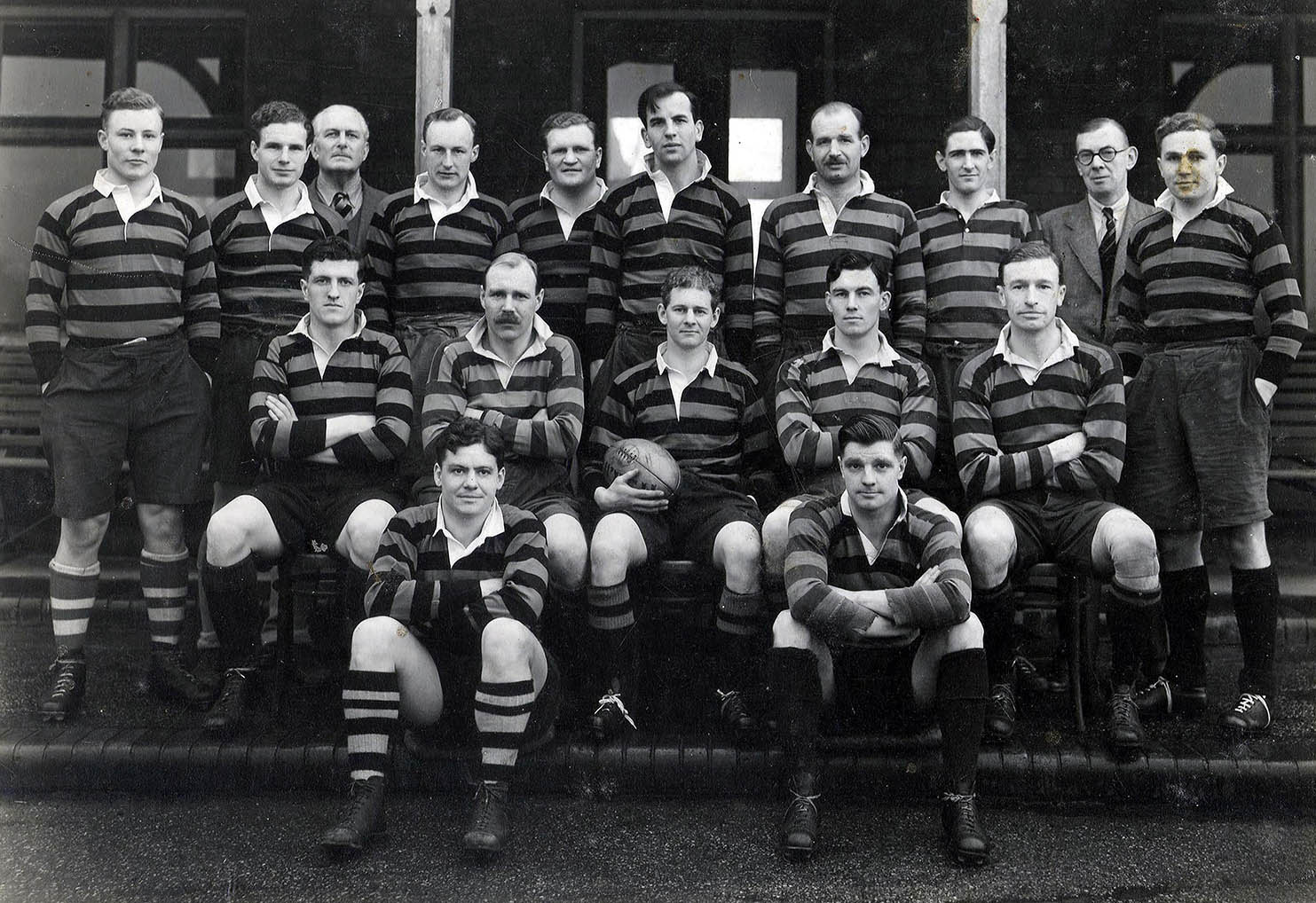 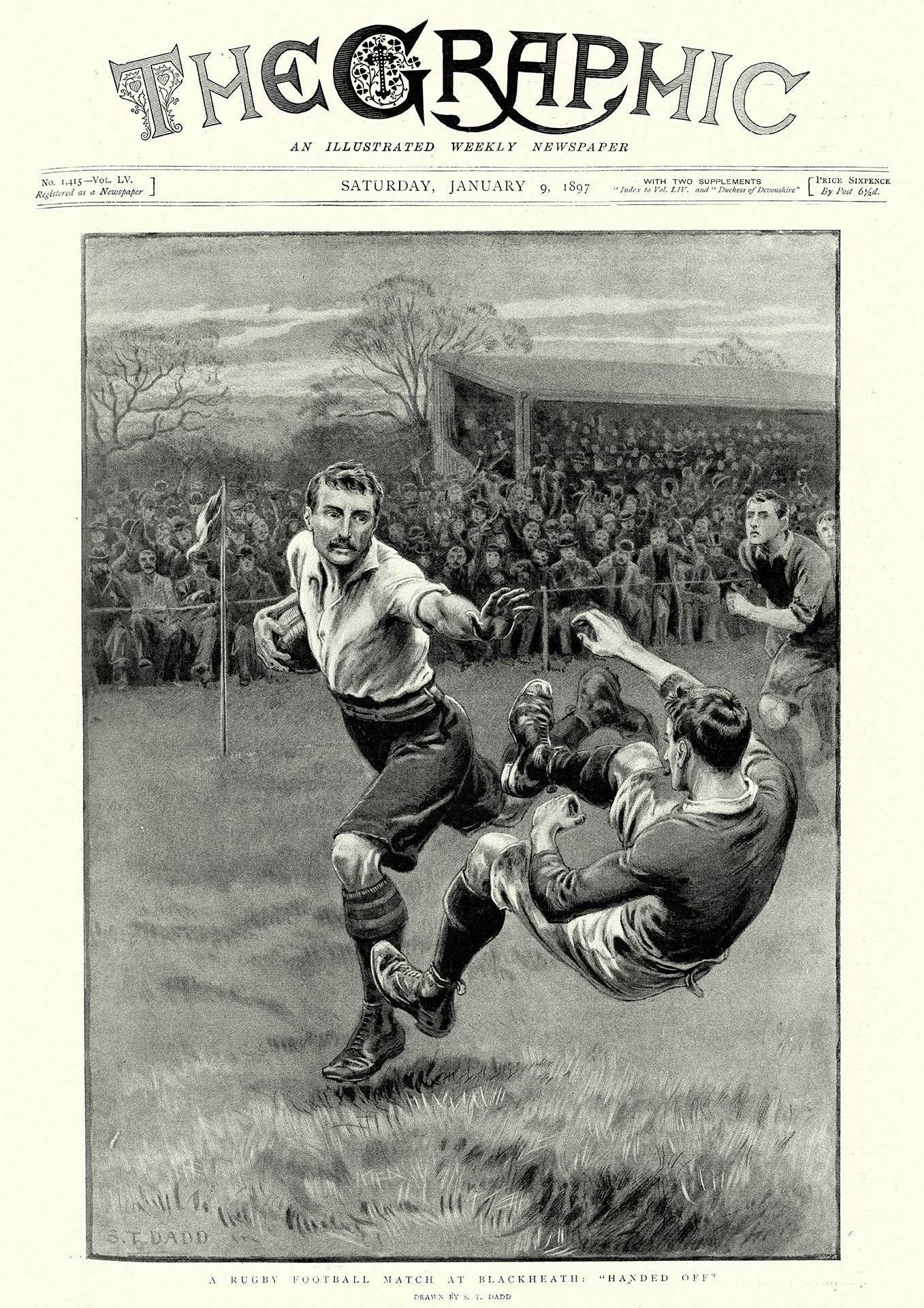 The lack of any written documentation to establish the date of the foundation of Blackheath Football Club leaves many historians in a quandary regarding the date. There are, however, documents that indicate that rugby was instituted at the Blackheath Proprietary School around 1856, and also that the boys who founded the Club were playing on the Heath in 1858.

The memoirs of former Prep School pupils published in 1933 by J.W. Kirby BA, contain references that rugby was played by the school on the heath from that time and the names given as founders of the Club were consistent. The claim is also supported by references in Marshall’s “Football the Rugby Game” published in 1892, the date being unquestioned at the time.

Blackheath is the oldest independent Rugby club, meaning that it was not attached to any institution such as a military establishment, hospital, school or college. There were a number of institutional sides that are older than Blackheath and it was they who provided the Club’s opposition. The Proprietary School and Blackheath FC had annual fixtures against each other for many years. It was on these occasions that the school supporters would shout “Up School” to the counter cries of “Up Club”. Blackheath FC are still known as “the Club” to this day.

They were founder members of the RFU, co organisers of the first ever international match and host to many more at the Rectory Field. Blackheath hold the record for the most international caps gained by its players until the Professional era started in 1995-96.

In 1888-89 the London Society of Referees was formed by A.J Budd and G.L Jeffery. Both were captains of Blackheath. At Easter the following season, Percy Carpmael, another Club captain, founded the Barbarians touring side. In 1906-7 three players, W.S.D Craven, ‘Birdie’ Partridge and Clive Liddell, founded the Army Rugby Football Union and for many years the Rectory Field, Blackheath’s home since 1883, was the Army’s home ground in London. 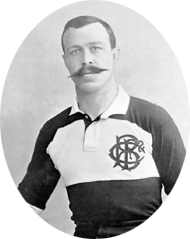 William Percy 'Tottie' Carpmael captained the club and was the founder and first president of the rugby union Barbarian Football Club. Carpmael not only ran the Barbarians but also represented the Ba-Baa's on twenty occasions usually as a forward. 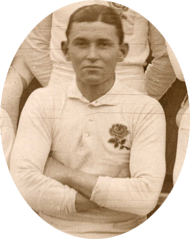 English lnternational before and after WW1. Credited with developing wing-forward style of play. 'Cherry' Pillman was the Club's first captain after WW1 in 1919-1920 and did much to restore the Club's fortunes. His brother, R.L. Pillman, was also an International but he did not survive the conflict. 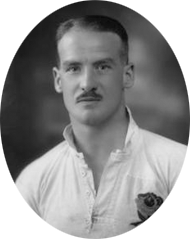 Known as the 'Pocket Hercules', at 5ft 5ins he was a brilliant scrum-half for Cambridge and England. He was captain of the Club in 1926-27. Died of pneumonia aged 32. 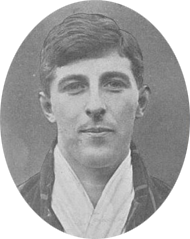 Cyril Nelson "Kit" Lowe is the most capped Blackheath player, representing England 25 consecutive times between 1913 and 1923. Shot down 9 enemy planes in WW1 and was shot down himself. The author, Captain W.E. Johns, supposedly based his fictional ace fighter pilot ‘Biggles’ on Cyril Lowe. 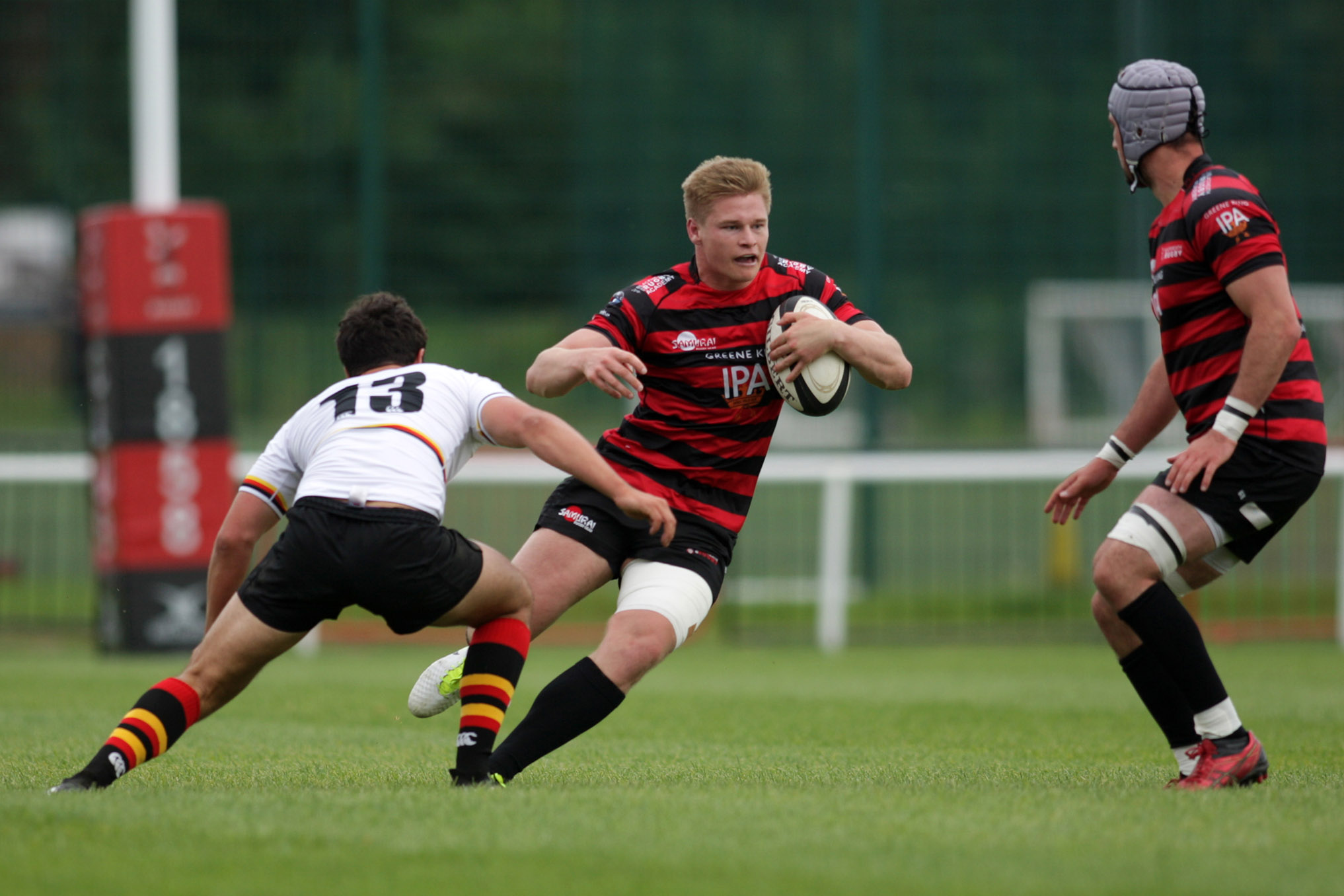 Our Present and Future.
In recent history Blackheath were running over 20 teams with only two home pitches. To ease this situation a second ground was acquired nearby at the start of 2007-08.

The site at Well Hall, Eltham, was developed into a community facility. An ‘All weather pitch’ was opened in August 2009 by representatives of the RFU, Greenwich Council and other bodies who helped to raise the funding for its installation. In September 2016 it had become imperative for the development and future health of the Club to move 1st XV matches from its long-time home at Rectory Field to these premises at Well Hall. This caused much heartache but with the ongoing developments and improvements at Well Hall, the Club now has a home base worthy of National 1 rugby.

Rectory Field continues to be used by many other teams of the Club and remains fondly in all our memories.

A great many thanks are due to our Club officials, past and present details of whom can be found within our honorarium. 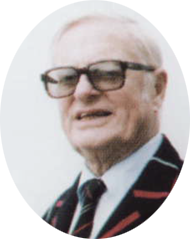 Wearing Colonel Begbie's blazer with the Proprietary School Badge used by the Club until 1958. He was Club President in 1966-69, Chair of the Blackheath Cricket, Football and Lawn Tennis Ltd 1977-80. Originator of the lnternational and Club Golden Oldies. 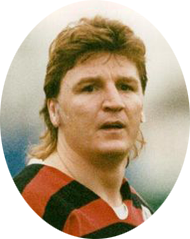 Harlequins, England and the Club. Charismatic wing-forward known for 'Boshing' the opposition. 'Mick the Munch' was The last household rugby name to play for the Club before the professional era. 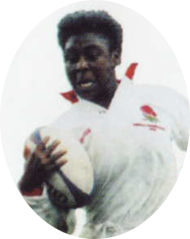 Blackheath and England three-quarter, scoring in the final of the Women's World Cup in 1994 when they beat the USA. Six Club players took part in the tournament.