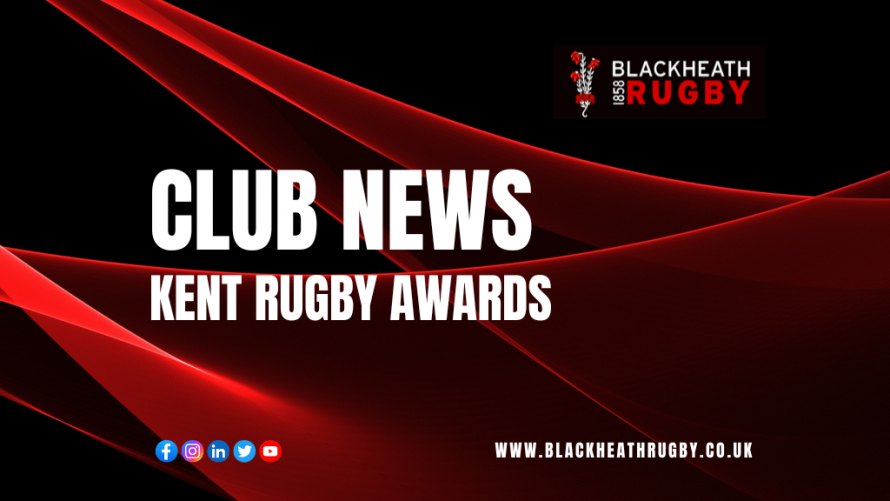 On Wednesday 8 June, Alan Thompson, President of Blackheath Rugby, and Pamela Kilmister, Chair of the Blackheath Rugby Supporters’ Club, attended an awards evening at Dartfordians RFC to celebrate the many rugby volunteers throughout Kent. The winners and runners up of the various awards were presented with certificates and trophies on the evening by Roger Clarke (Chairman of Executive Committee, Kent County RFU).

Split in to two parts (the Kent Awards, and the national Honda Awards), we were delighted to come away with two runner up certificates and a winning nomination.

Kent County RFU President’s Award
This prestigious award is given to a club volunteer whose efforts, more often than not, are unsung, and who makes an all-round significant contribution to the success of a club, either on the pitch and/or off of it. Our President, Dr Alan Thompson, was the winner of this category, after a nomination was submitted for his work with National 1 and National 2 teams during the pandemic.

“Alan Thompson has been involved with Blackheath Rugby for over 50 years, including coaching the Minis and Juniors for 14 seasons. He has been President of the club since 2018, and continues to be the team Doctor, a role that he has held since 2001. Since the pandemic, Alan has also been the Covid advisor for National League 1, National League 2 North and National League 2 South and, since rugby has been able to be played again, Alan has volunteered hundreds of hours working with the 47 National League clubs, recommending the appropriate course of action whenever a positive case has been found: his work has meant that rugby continued to be played, and has kept players safe and well. Alan does this without plaudits or fanfare, during this most exceptional of periods, and has enabled players and supporters alike to continue to enjoy the game of rugby.”

Alan was also nominated for this work in the ‘Unsung Hero’ category of the national Honda Awards, for which he earned a Runner Up certificate.

The other Runner Up certificate for Blackheath Rugby went to the regular band of volunteers at Hervey Road, in the ‘Beyond Rugby’ category – read the nomination, below:

“How has the individual or team gone above and beyond to support and/or build relationships with the local community?

We would like to nominate the group of volunteers who look after Hervey Road Sports Field. The Sports Field is owned by The Royal Borough of Greenwich and managed by Blackheath Rugby Club. The 4.8 Hectare site is largely maintained by a group of 6 volunteers, who work at the Sports Field usually on 2 days a week. The ground has been transformed from an unused, overgrown, neglected field into a vibrant community facility. The Sports Field now has 7 junior football/rugby pitches which are well used by a local community football club, Blackheath Rhinos, and by a local primary school, as well as by the Blackheath Mini-Rugby players on a Sunday morning.

In the summer months, the sports field is used by Greenwich Junior District Cricket, and also by 2 adult cricket teams for matches at weekends. There is a grass cricket square as well as an artificial cricket pitch and new cricket nets are being installed next month. In the pavilion, there is a small café which is open when the sports clubs are using the fields. There is a MUGA – Multi-Use Games Area which is used by a local netball team.

What impact has this had on the club and/or individuals and what achievements has this contributed to?

During the long period of lockdown in the first few months of 2021, the sports field was very well used by the local community as a safe place for socially distanced exercise to help them to get through the physical and mental health problems caused by Covid-19.

The camps in the school holidays run by the cricket and football clubs at the Sports Ground have been extremely popular, and many of those attending have been children from the local community in the immediate area around the Sports Field.

The volunteer group work co-operatively with local residents on projects to improve the biodiversity around the sports fields, including planting trees and planting daffodils. They have developed a close relationship with the residents’ group to jointly work together for the good of the local community.”

It is wonderful to see some of our volunteers being recognised in Kent, and we will be presenting our own Volunteer Awards at the beginning of the new season. Please do look out for next year’s nominations’ window – we know the incredible job that so many people do to keep all the sections of Blackheath Rugby running, and we would love to shout about it further afield.

Congratulations to Alan, and to the Hervey Road volunteers! 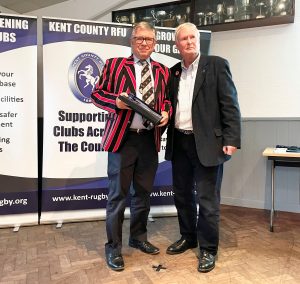 For further information on volunteering at Blackheath Rugby, please send an email to our  Supporters Club