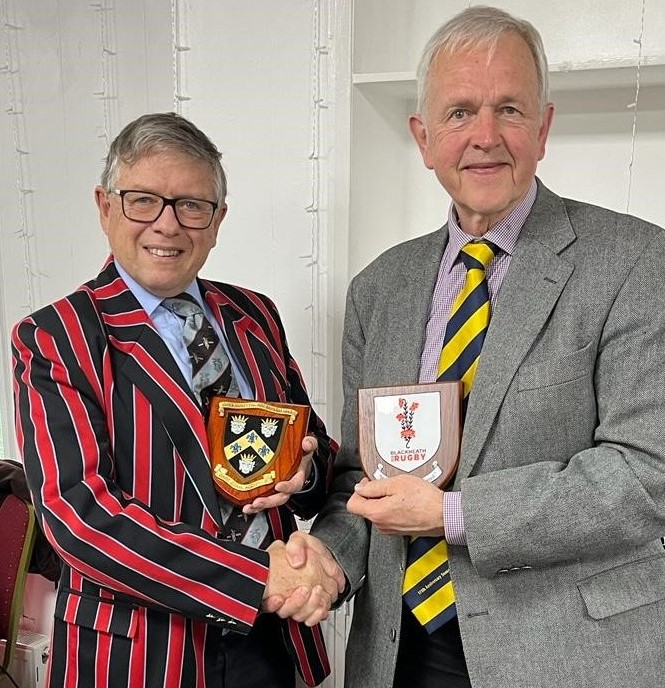 A unique exchange of club shields took place last Saturday when our club President, Dr Alan Thompson hosted the President of Guys Hospital RFC, Professor Stephen Challacombe to the pre-match lunch before the Blackheath v Leeds match. Both Guys Hospital RFC and Blackheath FC share a long and glorious history in the world of rugby union and both clubs were founder members of the Rugby Football Union, which celebrated its 150th anniversary last year.

The Hospital team originally played on Blackheath and after the formation of Blackheath FC, the two clubs shared changing facilities at the Princess of Wales pub. In recent times the rugby clubs of Guys Hospital, Kings College Hospital and St Thomas’ have merged to form one club. The merged entity plays its games at the Guys Hospital Athletic Ground at Honor Oak Park and its first team plays in the Kent Metropolitan league structure.

Both Blackheath and Guys Hospital have produced many international players over the years including several British and Irish Lions. Most recently, Cassius Deschamps from Guys Hospital represented Denmark in 2018 and scored 2 tries and 16 conversions on his debut against Estonia!

Back in the day, Blackheath and Guys had a regular fixture against each other and it was fitting that Professor Challacombe received a warm welcome from the diners at the lunch at Blackheath last Saturday. The Guys Hospital shield will take a proud position alongside the shields of many other rugby clubs in the club bar recognizing the close relationship between both clubs.