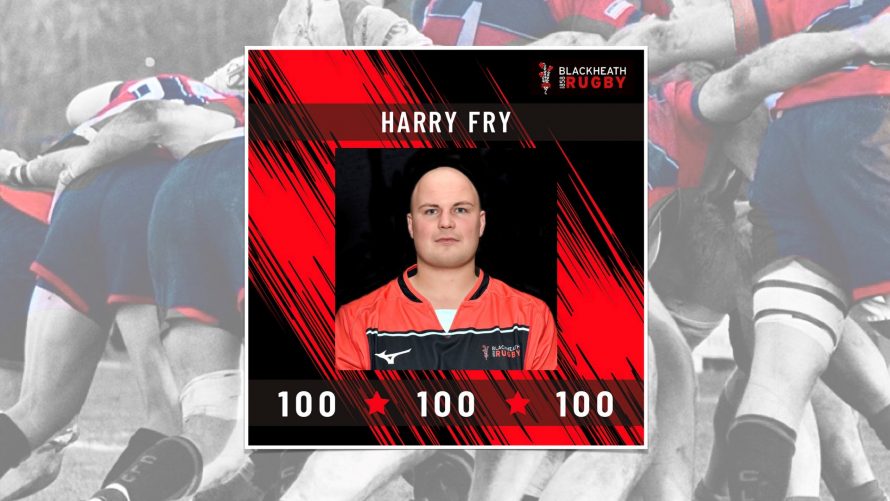 This Saturday marks Harry Fry’s 100th appearance for Blackheath’s 1st XV. In that time, he has scored 15 tries for Blackheath including a memorable match-winning hat-trick against Chinnor in April 2019. Most of his appearances have been as a hooker but he has also been a very able back-row forward when required.

Harry played for Blackheath Juniors from 2005 and then began his senior rugby career in National 2 South with Westcombe Park. He became a regular in the Kent County side, with whom he’d moved up the age groups, and featured in the 31-23 victory over Durham in the County Championship Plate Final at Twickenham on 1 June 2014, having made his first Blackheath 1st XV appearance off the bench in April of that year, against Doncaster.

Harry was made a Vice President of Blackheath FC in 2020. The citation for his appointment as a VP said: “This honour has been bestowed on you in recognition of your outstanding contribution as a member of the 1st XV squad. You have shown a consistently positive attitude towards your career at Blackheath. You are always looking to ‘help’ the Club and you are a loyal member of our team.”

James Shanahan, Head Coach, says “What I love about Harry is his resilience, his tenacity and his energy. He’s been with the Club a long time: lots of Hookers have come and gone, and he’s stuck in there. He’s represented the Heathens and, on Saturday, he will have his 100th appearance for the 1st XV. It’s a great achievement for him, and I’m really glad he’s reached that milestone before he moves to Australia with his family, for the next chapter of his life.”

Harry is married to Ellie (sister of Blackheath players Richard and Sam Windsor) and baby Clementine was born in August 2021. We wish them all the very best with their move to Australia.