A hard-fought victory for Blackheath to wipe away the memory of their dismal performance at Hartpury College a week ago, but perhaps more significantly in the long-run, to mark a new era for the Club in the surrounds of their Well Hall home.

Starting with far greater purpose and intensity than they’d shown at any stage in Gloucestershire, the hosts inflicted most of the damage in the opening period.

Two strong scrums ten metres from the Esher goal-line led to a successful penalty for Leo Fielding on 14 minutes, and although Blackheath had to withstand a period of pressure mid-half, forcing Fielding into a last-ditch tackle to deny the visitors as they broke clear down the right flank, the Club’s first try of the campaign followed six minutes prior to the break, as Dan George was driven across from a close-range line-out.

Despite the unpleasant overhead conditions, which included incessant drizzle and an annoying cross wind, Fielding added the conversion from out wide for a 10-0 lead at the interval, quickly eroded as Esher fly-half Paul Roberts, equally impressive, registered the visitors’ first score with a long-range penalty early in the second period.

However, another Fielding strike restored the ten-point advantage soon after, as Esher were penalised for not rolling away close to their uprights, and a couple of charges from George and Geoff Griffiths kept the pressure on the Surrey side during the third quarter.

Nevertheless, the visitors had the edge on territory over the latter stages, but although Roberts added a further three points on 66 minutes, Blackheath’s defence, led by the excellent Tom Baldwin at number-eight, held firm for a deserved win.

Next Saturday, Blackheath travel to the Lancashire coast to face Fylde at the Woodlands Memorial Ground, before returning to Well Hall on Saturday 24th September for the visit of Coventry. 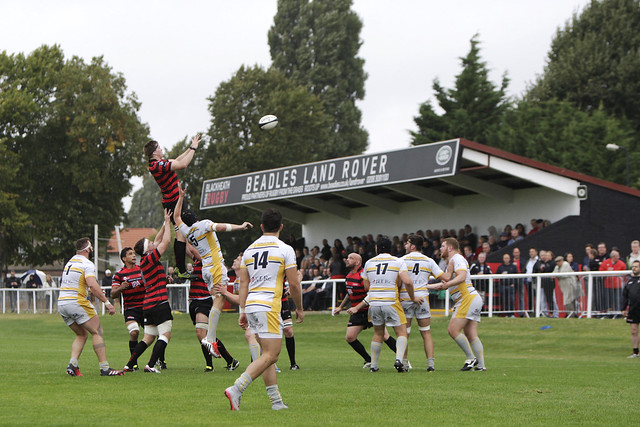