For a brief moment early in the second half, this game burst into life as Blackheath crossed the try-line twice, reducing a 19-0 interval deficit by ten-points with 35 minutes remaining. 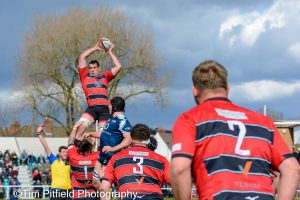 However, the errors that had plagued the hosts during the opening period quickly returned, and Rams were able to conclude a convincing victory, while placing Blackheath in an increasingly precarious position in National League One, with only two tough away trips remaining.

The bulk of the damage had been done in the first 40 minutes. An early intercept put Rams in Club territory, and a penalty to touch saw number-eight Robbie Stapley over from the lineout for the first try, converted well by fly-half Sam Nicholls.

Tom Vooght burrowed over for a second on 16 minutes, and while Blackheath wasted a 50:22 with poor handling, and saw second-row Colin Thomson pinch another throw, the Rams open-side stormed over for his second score as the visitors made better use of their lineout, Nicholls striking another conversion for the half-time lead. 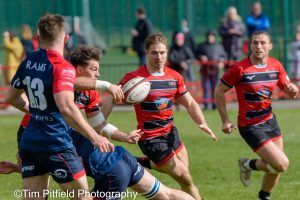 Nevertheless, Blackheath came storming out of the blocks at the re-start. Markus Burcham and Marcus Kershaw both produced fine off-loads, and Andrew Denham slipped ball inside to opposite wing Jake Lloyd to score, and moments later a tap-penalty from Ollie Claxton close to the uprights had Matt Collins driving over. 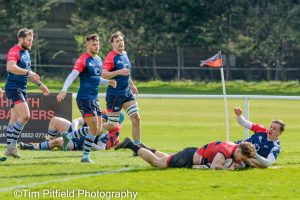 The concession of five penalties in the opening ten minutes of the second period looked to have Rams on the backfoot, but soon the frantic, anxious play which marked Blackheath’s first half returned.
Handling errors and poor kicking thwarted any possibility of building sustained pressure while, with the stiff breeze now in their favour, Rams were able to defend comfortably. 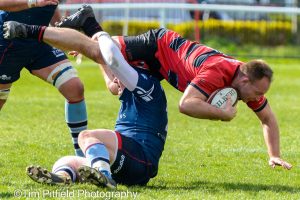 On 71 minutes a neat grubber-kick from Rams’ centre Connor Hayhow sat up perfectly for full-back Michael Dyke to gather and score, and although Kershaw picked up loose ball to sprint away for a third Blackheath try, Rams’ replacement half-back Andrew Humberstone added a penalty to his recent conversion to see out time.

Blackheath now sit seven points above the relegation zone and Leeds Tykes, who have two games in hand. The Club travel to Manchester next Friday to face promotion chasers Sale FC, kick-off at Heywood Road is at 3.00 pm.