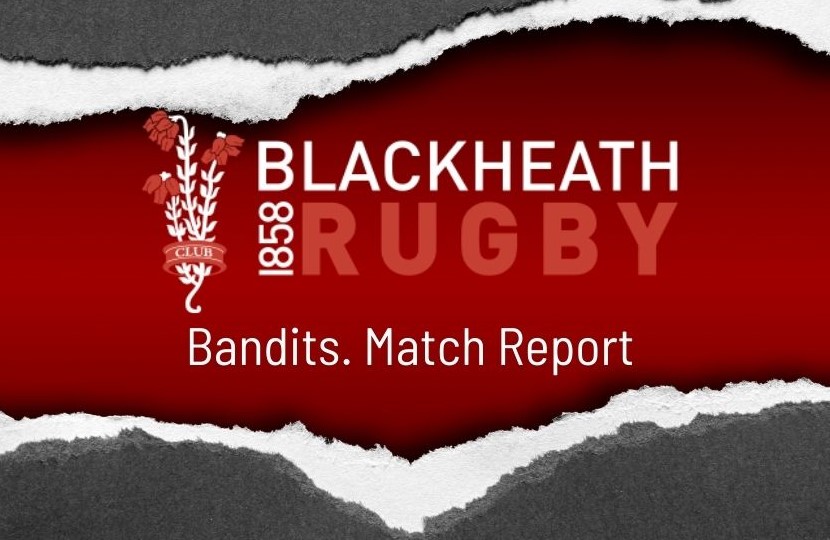 The Bandits maintained their 100% home record this season with an 18-13 victory against hitherto unbeaten league leaders Old Colfeians 2nd team on Saturday, in conditions which varied between inclement and bleak. In a game for the purists, Blackheath defended superbly, kept the scoreboard ticking, and broke through at key moments to take victory, despite being comprehensively out-scrummaged on a pitch where grip was hard to find.

The first 30 minutes were dominated by the Club side; Colfes were forced in to conceding a penalty just outside their 22 almost immediately after the kickoff, which was slotted by fly-half Sean Collett. Blackheath put the pressure on again after the restart and, despite having a couple of opportunities to get over the line, had to make do with a second Collett penalty around the 10-minute mark. Momentum was difficult to build in the conditions, with strong gusts and showers making passing troublesome; as such, skipper Andy Lock had delivered a firm team-talk stressing the need for sensible play, no risky long passes, and concentration and care throughout. It therefore came as a surprise to his team-mates and spectators when, from a scrappy piece of play, the second row elected to sling a 15 metre no-look, behind-the-back pass in the direction of wing three-quarter Jonny Moore. Happily, Colfeians were equally as surprised by the move: Moore reacted quickest as the ball popped in to his hands, and he raced down the touchline for the game’s first try. The referee came to prominence thereafter, and Blackheath’s penalty count began to grow, often in less-than-clear circumstances. Although the Colfes outside backs offered little by way of an open threat, penalties gave them field position, and a lapse in concentration in defence let the visitors’ scrum-half dart through for a try from a quick tap, making the score 11-5.

It was a similar story after the break, and Colfeians took advantage of yet more good field position to score from a driving lineout early in the second half, the missed conversion leaving the Bandits a point in front. The remainder of the match was intensely competitive, although mostly played in the middle third of the pitch; whenever either side looked to get close, penalties or errors gave the defenders a chance to clear. Around the hour mark, however, the Bandits were able to build a few phases, force some penalties and close on the Colfes’ line. During this period, the Colfeians’ skipper was yellow-carded for backchat; the only surprise being that it had taken that long. A tap penalty 5 metres out was followed by pick and gos from the big forwards, from which Hooker Conor Mitchell bludgeoned his way over the line, and Collett’s excellent conversion from wide on the right gave the Club an 8-point lead going in to the final quarter.

The game remained close and, in the final five minutes, Colfes enjoyed virtually complete possession and were able to cut the gap to 5 with a penalty in front of the posts. The Bandits could do little right in the eyes of the referee, who carded Lock and Mitchell within a minute of each other (very contentiously in the former’s case), both for high tackles as the clock ran down. Although there was one more chance for the visitors to snatch the win, the 13 Blackheath players threw themselves around for the final seconds, did enough to force Colfes in to a final error, and Nik Dinning put the ball in to touch for a scrappy but splendid win.

Namir Khalil was named as the Bandits’ Player of the Match, although there were excellent contributions from the forwards as a pack, and the lineout was a surprising success given the weather. Line speed in the backs was very impressive, and the way the top-of-the-league team were shut down by Daf Lloyd and Oli Chatterton in the centres was an integral part in the Club victory. The Bandits welcome Dartfordians to Well Hall this Saturday 26th February, and will expect to avenge their narrow defeat on the road earlier in the season.