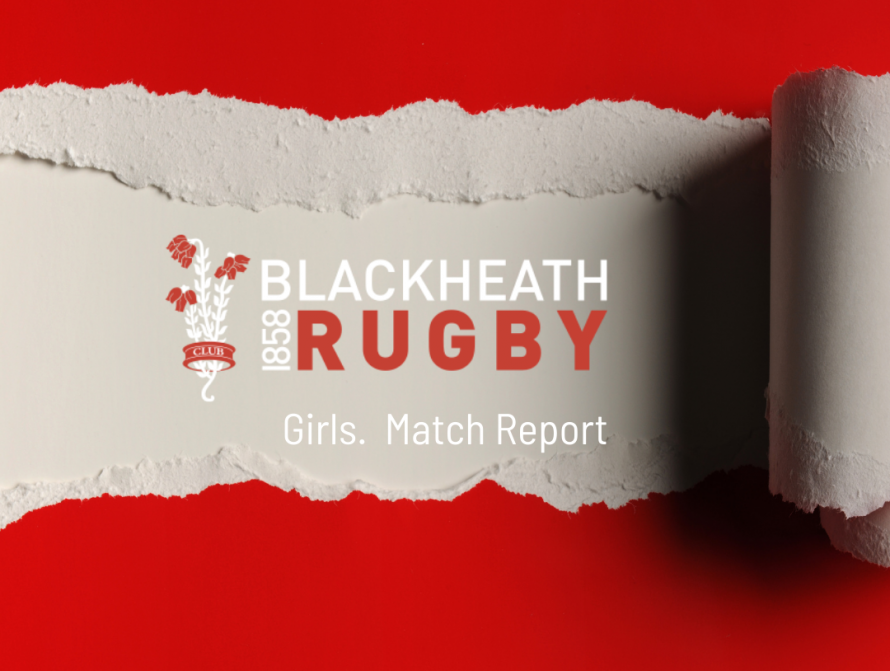 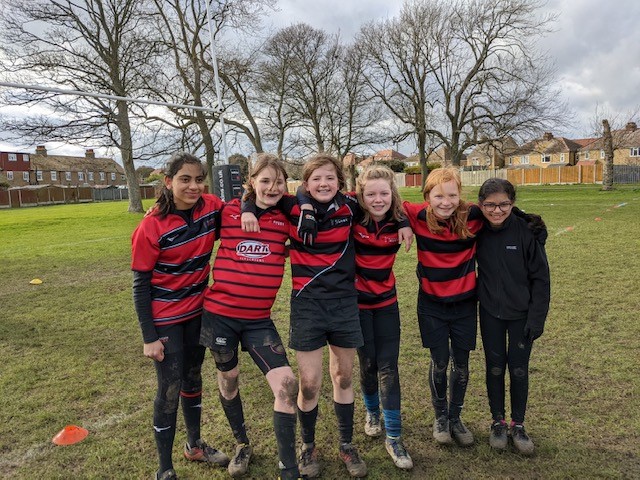 The Blackheath U13 girls squad teamed up again with our friends at Old Colfeians and Dartford Valley for the finals of the Kent County Girls Waterfall Competition.  Hosted by Thanet Wanderers, the “Crimson Black Darts” had three games.

Dartfordians were well drilled and started brightly, with two quick tries in the opening minutes of the first game catching the Crimson Black Darts a little cold.  Similar to the previous round of the competition though this served as a wake up call.  The commitment and organisation in defence stepped up.  Some confident tackles, particularly from Meera and Orla, and smart use of the touchline to shepherd their opposite numbers off the pitch meant the Crimson Black’s didn’t concede again.  The attacking play, particularly when kicking out of hand, showed signs of promise but despite some close calls the Dartfordian defence held out.  Having weathered the early storm the mood was up beat as they headed into the second tie.

In the absence of a coin, kick off was decided by a rock-paper-scissor shoot out, which had to be reset twice (due to differing rule interpretations from the respective captains).  The formalities resolved, the Crimson Black’s opted to kick off and immediately applied pressure.  Looking much more settled and comfortable with the ball in hand, they twice exploited space on the right wing to touch down in the corner.  Tess going over to open the scoring and Connie following up a few minutes later.

Aylesford/Folkestone were playing well though and continued to push forward.  Mid way through the first half only a superbly executed cover tackle, 5m from the line by Connie, prevented the score.  The closing stages of the half saw Aylesford/Folkestone camped on the line repeatedly re-cycling the ball.  An exemplary defensive set from the whole team though kept them out and ensured that momentum was retained going into the second half.

Following the restart the Crimson Black Darts were deep in opposition territory when a mix up and some quick thinking from Frances allowed her in to dot down for a third try.  The Crimson Black’s continued to stretch the play across the pitch with Amarisa and Immy unlucky not to be rewarded after a burst down the left wing.  Quick distribution from Natalie opened up the space for Tess to add a fourth and record the first win of the day.

By the third game the Crimson Black Darts had hit their stride.  Jaya was unlucky not to score herself after a series of driving runs near the Beccehamians line.  The defence tied in though, Ella was able to finish the move and score the first of her two tries on the right wing.  Despite a well worked try for Beccehamians before the break, the pattern in the second half remained the same.  Beccehamians were a threat but the press defence was too well organised.  Crimson Black’s continued to carry well.  Frances scored again after some neat interplay close to the line and Emily was on hand to touch down after Amarisa had broken through a series of tackles.  Orla was unlucky not to add to the tally after an arcing run down the left wing took the team to within a few meters of the line.  Tess did though grab a final score.

A dominant tackle causing Beccehamians to knock on in their own half was the final play of the game and summed up how the tenacity shown by the team had grown through the competition.

Particular thanks to Paul & Pete (Old Colfeians), Luke (Dartford Valley) and Martin & Chris (Blackheath) for their coaching efforts on the day and to all the parents who braved the occasional sunshine to make it an excellent day out on the coast.